Intouch Games Ltd first launched back in 2007, and the company are based in the West Midlands in the UK. The software originally just powered one online bingo site called mFortune, but they’ve since gone on to open three more applications over time.

The company are still considered to be quite a small independent brand, however they are adding more and more to the sites each year and gradually becoming stronger than ever now. They aren’t anywhere near as big as some of the larger competitors out there such as Playtech, Dragonfish or Cozy Games, nevertheless Intouch Games are still operating to great success.

The Intouch software was one of the first of its kind, and the company paved the way for mobile gaming apps from then on. They’d created a brand new way of gaming on the go, and other software brands were soon to follow suit. The standout feature was that it was always created with mobile gaming in mind, whereas most online bingo software companies would primarily design the software for a website first, and then expand out into mobile versions for a brand.

Because of this the Intouch apps are generally some of the highest quality and most advanced on the market to date, and as the company only run a few sites, you can rest assured each site will get equal attention. They currently run Pocket Win, Mr Spin and also the recently launched Dr Slots too, however mFortune still remains their most popular site to date. 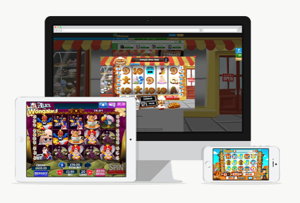 Intouch Games started out in 2001, originally as a physical slot machine and jukebox manufacturer. In 2006 they made the move over to online gaming, and developed a unique software that now spans four very successful mobile applications.

Here are the main milestones of the Intouch Games Ltd company: 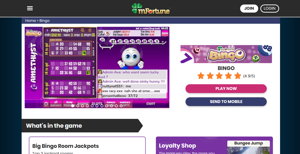 Unfortunately when it comes to actual online bingo, it’s worth mentioning that the bingo on offer is very basic. You will generally only find the following online bingo games across the Intouch Games network:

The choice here is obviously fairly limited, therefore if you prefer a much wider variety of bingo styles you may have to look elsewhere for other variants. The games are all designed for quick on the go mobile gaming however, and they are kept quite simple and classic making them really easy to play.

The rooms are quite varied and you will find lots of individual theming across the board, and to be honest some players prefer just one bingo variant as it keeps things simple and doesn’t become too overwhelming. It also stays true to the original bingo style of that in physical bingo halls, helping to maintain that classic bingo feel.

As the platform first started out in casino and games, there is a really great variety on offer throughout this area of the brand.

You will find Roulette, Blackjack and Texas Hold’em Poker, plus over 35 unique and exclusive slots. All games have been designed specifically by the Intouch Game team, and you won’t find these titles anywhere else online.

As this is a much smaller network compared some of the bigger brands out there, the jackpots are naturally not as high due to less players taking part.

This is not a bad thing however, as it could actually increase your chances of a win. There will be less competition with a smaller number of players involved, and it will also add to a more intimate gaming experience all round.

Jackpots can vary across the sites, and main prizes tend to start from around £30 to £40. It’s worth noting however that all sites have a few progressive jackpots up for grabs too, some of which currently stand at a whopping £510,000.

All of the Intouch Games sites are licensed and regulated by the UK gambling commission, and the brand have also been certified by GamCare for their achievements in player protection and responsible play.

The brand not only offer exceptional customer service and safety when it comes to using the sites and sharing personal banking details etc, but they also have a huge focus on gambling awareness and gambling social responsibility too. 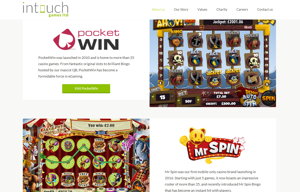 The Intouch Games network as a whole has a very slick, fast and fun feel to it. As the company is smaller the gaming feels much more personal and intimate, and all of the games are designed in house giving a sense of real exclusivity.

I’d say that the main thing that attract players to these sites, is the sheer simplicity of the brand. They offer a handful of really classic gaming sites, and each one is super simple to use. The gaming isn’t too overwhelming and the bingo in particular is fairly basic, so it’s all very easy to pick up and play at any time.

Players who enjoy these sites most likely own smart phones and tablet devices, and are probably the types of players who enjoy gaming on the go. There are desktop versions available for all of the Intouch Games sites, however their mobile app offerings are the main event here. Nearly all online bingo sites these days now have mobile applications available on each brand, however at Intouch this has been their true focus since the company started.

You can find out plenty of information on Intouch Games and the sites that they run over on their website at www.intouchgames.co.uk. If you would prefer to contact a member of their customer service team however, then you can do so via the following options:

It’s very easy to see why the Intouch Games company have had such success with just a handful of sites. Their innovative software development has really advanced the mobile gaming industry, and their high quality apps offer an exceptional online gaming experience all round.

The bingo may be basic but it’s perfect for players who enjoy simplistic gaming, and it’s even more perfect for people who enjoy gaming on the go. The apps are super simple to use and the classic layouts make the gaming accessible to play pretty much anywhere. Although Intouch may not be one of the larger software companies out there right now, their products and services definitely do not fail to please.

Some of the main things that make Intouch Games bingo sites really stand out from the crowd are as follows:

If you’re looking for an online bingo site that is simple to use and focusses on classic bingo games, then any Intouch Games site is definitely worth a try. The slots titles are all designed in house and therefore totally unique to the brand, and because the company is smaller than some of the bigger gaming giants out there, you’ll get a really personal gaming experience overall.

The only downside to an Intouch Games bingo site is really, well, the lack of bingo. You only get the option of 90-ball games and there only a very small number of rooms across the network too. This isn’t really a massive problem however, as the games that they do offer are of excellent quality. What they lack in variety, they make up for in style, and there are always plenty of fantastic slots offerings to play alongside.