Those of you who like to play slots as well as bingo might already know about Age of the Gods; it is probably the biggest slot series in existence. A company called Playtech make them, and they also have a bingo network, so if you play somewhere that is on the Playtech network you will have access to this game.

They’ve made absolutely loads of these games over the years, all with a slightly different God/Myth theme, and it is so popular that they made this bingo version as well.

Lucky for us too, because it’s a really good addition to the regular bingo games, especially if you are a fan of community payouts. It’s also a reall good option for anyone who wants to try a bingo variation but isn’t keen on the more crazy games out there like Bouncy Balls or Cash Cubes.

Age of the Gods Bingo is a bit more low key, but different enough to make it feel fresh.

How to Play Age of the Gods Bingo

This is a 90 ball game so unless you have never played bingo before you will know exactly what to expect.

The tickets are bought, the balls start being called, and prizes are dished out at 3 different stages:

Like always, the prize increases for 2 lines and again for a full house, with the amounts being decided by how many tickets have been bought, so the more players the bigger the prizes.

Where this game switches it up a level though (apart from the cool theme and dramatic music of course) is with the Age of the Gods Feature Prize.

Arena of the Gods Feature 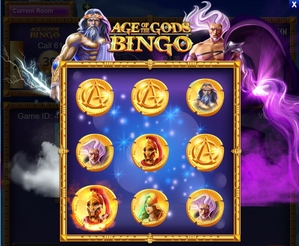 Arena of the Gods is basically a randomly triggered jackpot.

If a gold coin appears on the first ball called in a game, the feature prize will trigger at the end. It happens by chance but it’s not rare, and all the bingo balls turn gold when it does.

In this bonus game, the full house winner gets to play an extra round where they are presented with 9 gold coins. It’s a bit like a scratch card, and they have to select one coin after another until they match three God symbols.

The God they match will decide how the money is split and who gets hold of it:

This is great because even players who haven’t won anything yet can be involved with the feature round, rooting for Zeus or Athena.

The winner has already won the full house and will get at least a share of this mini jackpot if not more, so everybody is happy.