The game of Slingo is, quite literally, what you would get if you took a slot game and a bingo game and merged them together into one. Even the name is half of one and half of the other: SL(ots)/(b)INGO – see?

Apart from being fun to say out loud a few times in a row*, this game is also fast becoming a new favourite among bingo players and slots players alike, thanks to its unique setup and how easy it is to play.

*You just said “slingo” to yourself three times in a row didn’t you? Admit it.

How to Play Slingo

One of the key things about this game is that it is both multi-layered and easy to play, a rare combination.

There is also an element of choice and player control that you don’t find with many other ‘soft’ online gambling games. This is why it should appeal to most bingo fans. 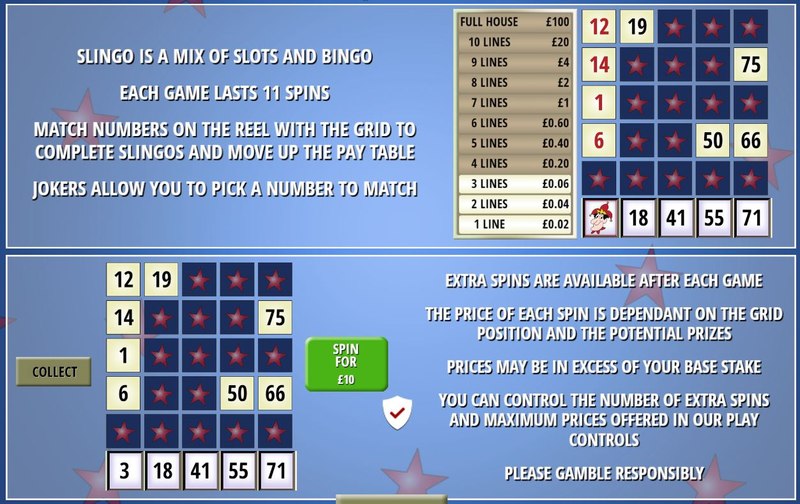 The basic concept is the same as bingo; you have a card with various numbers on it between 1 and 75, and you need to fill that card as quickly as possible. In the same way as bingo, you are looking to complete lines, but in Slingo these lines can be horizontal, vertical, and diagonal, and the more of them you complete the more money you win.

The way you mark off your numbers is where the slot element comes in. You will get a certain number of spins per game, and the bottom bar will spin in 5 numbers per spin which line up with the vertical rows on your card. Any matching numbers are marked off, and on you go.

As well as numbers, you can also land jokers, free spins, and devils. A joker can be placed anywhere on the row it is on so the player can choose the optimum number to mark off which is a great advantage. The free spin symbol means you miss out on a number for that row but you do get an extra spin for free at the end, while the devil is essentially a dud number.

Once all of your spins are complete, you can either collect any winnings (which may be less than your initial stake) or pay to spin again. The amount it costs to spin again will depend on how promising your card looks at that point. It can be anything from a penny to several pounds. You can buy more than one extra spin but this is usually capped.

The aim is to win more than you stake, but obviously you can also end up staking a lot more and still coming away with not much more than you had in the first place.

One of the best ways to get to grips with the game is simply to play it, but if you are cautious about spending your own funds then we can walk you through a game using our funds (you’re welcome) so that you can see how the game works step by step.

There are now many different variations of the game, some with extra features, jackpots, and different numbers of spins, but for this walkthrough we will concentrate on a classic version by Slingo Originals.

This is the screen you will see when the game first loads: 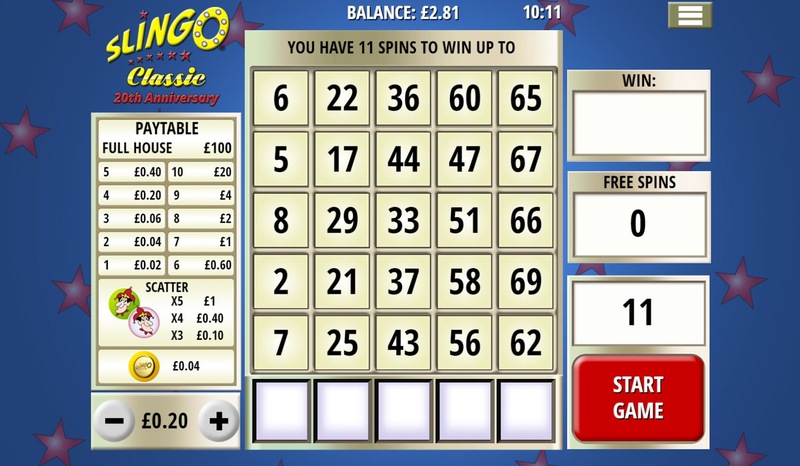 Note the pay table on the left.

It’s worth mentioning that as you increase your stake, the amount you can win will also increase, so it’s all relative. We are only playing with a 20p stake, so the maximum we can win is £100, but if we bump that up to a £25 stake we can win a lot more: 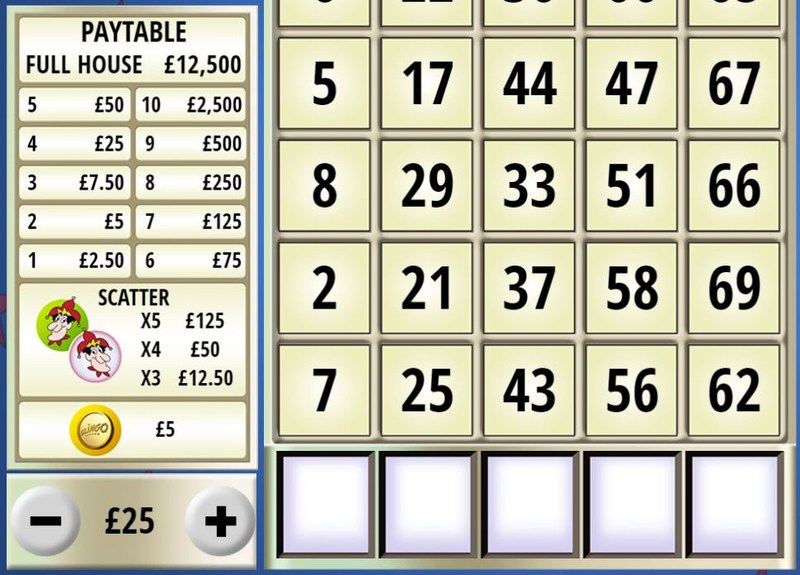 This game gives you 11 spins to begin with, and as well as the regular jokers it also has a super joker which you can place anywhere on the board regardless of which row in lands under. There is also an instant cash prize for landing 3, 4, or 5 jokers in the same spin. Lastly, the coin icon grants an instant cash prize.

Now, let’s make our first spin and see what we get. 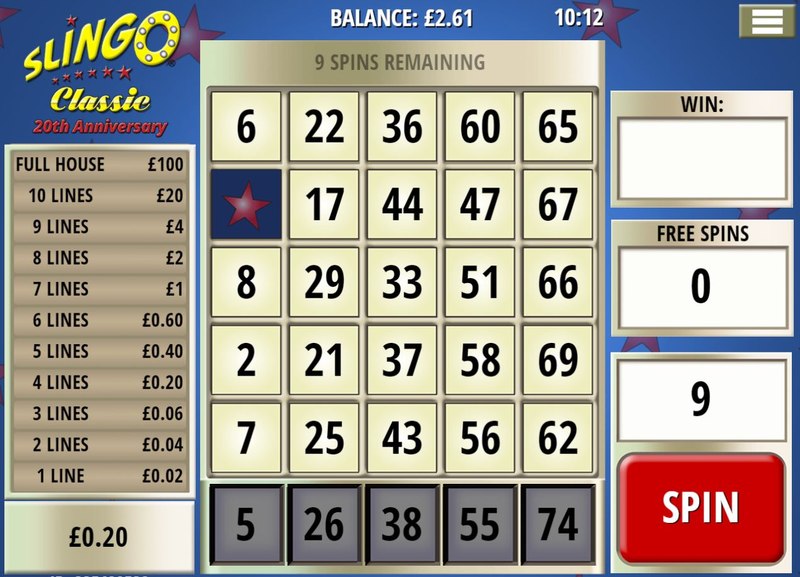 Our first spin didn’t match any numbers, but our second did. In the image above, you can see that we now have 9 spins left, and the number 5 has been matched and marked off the left most column.

Let’s keep spinning and see how we do. 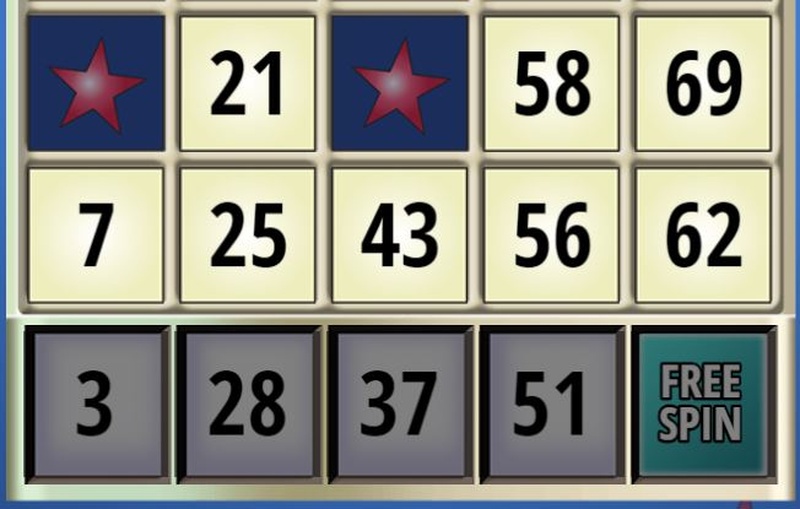 We are steadily marking numbers off our card, but we have also just landed a free spin. This landed on the right most reel so there is no opportunity to mark off a number in the right hand column, but we do have an extra spin in the bank to use once our initial 11 spins are complete. 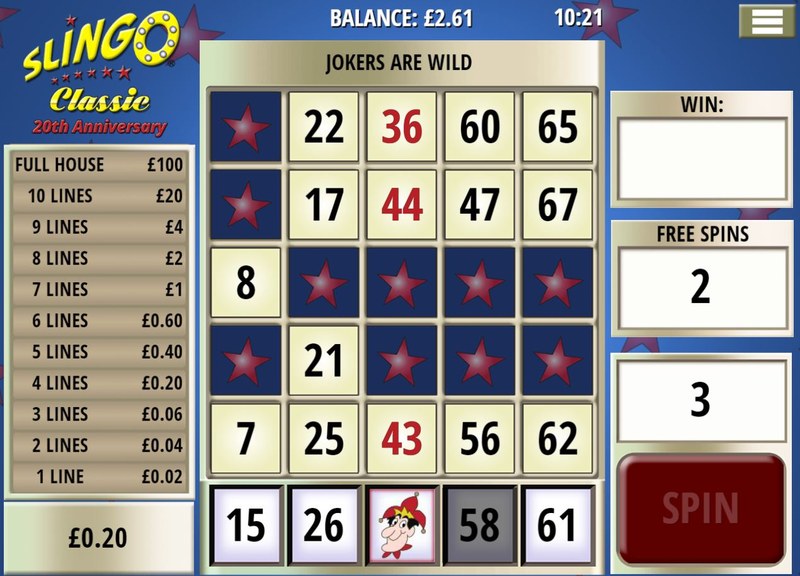 We have now got through most of our spins and finally managed to land our first joker of the game, on the middle column. You can see that the numbers in that column have turned red, and this means that we can pick any one of those numbers to be marked off.

Which number would you choose?

The best strategy is to mark the number which gives you the greatest chance of creating a line, and in this situation both the 36 and the 44 are evenly matched because they both contribute to the same vertical line, but also have one number marked off on each of their horizontal lines. Number 43 does not currently have any numbers marked off on its’ horizontal line, so that’s not the best option.

We will go for number 36 on a hunch, that’s all it comes down to at this point. 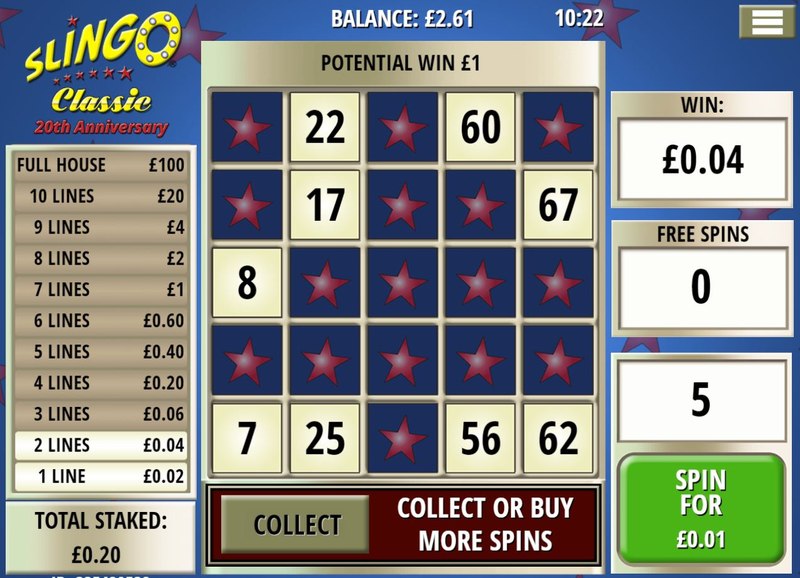 Our spins are now complete, including our free spins, and we have won a paltry 4 pence from two lines on our 20 pence stake. We now have two options:

Since the next spin is so cheap it’s worth a shot, so we will pay for an extra spin and see what comes up. 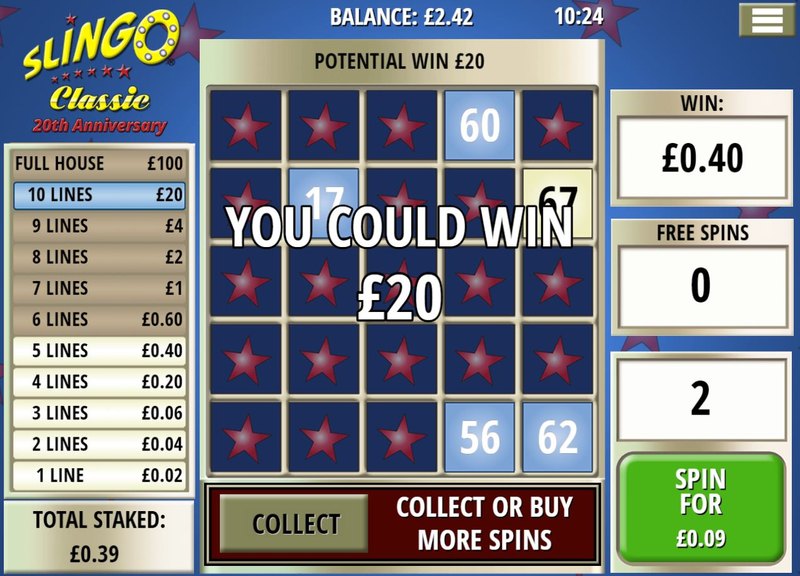 We have now bought 3 extra spins taking our overall stake up to 39p because the second and third spins cost 9p each, but we have increased our winnings to 40p, so we are a penny richer – woohoo!

There are a couple of chances to get an extra line if we land a 60 or a 17, but the chances are slim, and at this stage in the game it might be smarter to come away more or less at evens and simply start a new game.

You can see though that we managed to not only reduce our losses, but actually come away better off – albeit not by very much at all – by buying those extra spins. On another game it may have got us nowhere, but that’s the beauty of Slingo.

A Bit of Info About Slingo

It all started in 1994, when Sal Falciglia decided he wanted to create a new TV game show with bingo and slots at its heart. However, he wasn’t entirely sure how this would work, so after much thinking and note scribbling he realised that a 5 reel slot and the five rows on a typical bingo card could work together in some way and bought an old 1950s slot machine to help him figure out the rest.

The old machine (it was a Bally for anyone who knows the brand) did the trick, and with the help of his two young sons, Sal had the game figured out. What he didn’t have was a way to show it to people, so he hired a computer programmer to put the game on CD-ROM – this was the early 90’s remember.

The ability to showcase the game so easily led to Slingo launching on AOL when that was still a thing, where it ranked as the #1 game for 2 years straight, becoming the most played game in the world. It wasn’t a gambling game at this stage, it was played by two players who would collect points and try to beat each other. There was even a marriage after two people who met playing the game online tied the knot!

Sal’s next call was to IGT, who had the first Slingo slot machine developed and on the casino floor by 1999, and by 2001 there was also lottery style slingo scratch cards available to buy in shops all over the USA. Just one year later, the Slingo website was launched and the game was big enough to operate independently.

Fourteen years after the initial idea to create a new TV game show, Slingo was finally in the studio shooting their pilot in 2008. It went down well, but despite this the pilot was never picked up and no further episodes were created. It’s a shame, but who knows what the future may hold. 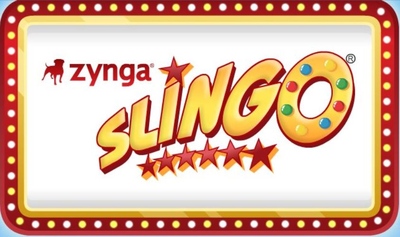 By 2012 the world was a very different place than when Slingo was first invented. AOL was dead, social media was very much alive, mobiles were everywhere, and mobile gaming was an industry all of its own.

Zynga Slingo was launched on Facebook and although it only lasted 18 months it could boast 54 million players per month. When Slingo was sold to RealNetworks in 2013 their new owners tried to do things their own way and Zynga Slingo was cancelled, but they didn’t do great things with the business and didn’t hold onto the company for long.

It is now owned by UK based firm Gaming Realms who have big plans for the future of Slingo, and since it seems to be coming back in a big way their plans appear to be working.