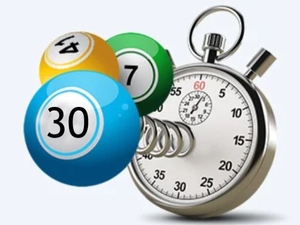 Another new(ish) variation to the bingo scene, 30 ball bingo is like a mini version of 75 ball bingo and it is the smallest game of the lot.

We are back to using a square grid as the basis for the game, although this time it is just a tiny 3×3 grid giving you nine numbers to mark off your card, so one more than if you were playing 40 ball bingo, interestingly.

The three vertical columns can contain the following numbers, decided at random:

30 ball bingo is sometimes referred to as ‘speed bingo’ because it is possible to complete a round of 30 ball quicker than any other variation of the game, thanks to the ratio of balls to numbers on each ticket.

This is also the only version of the game where it isn’t possible to win more than once with the same ticket, although that is only because there is just the one way to win here – by getting a full house.

That said, the odd pattern is creeping in here and there at some sites so this might be something that changes and develops as time goes on. The patterns you can make with a 3×3 grid are limited though, so there is only so far this idea can go.

Being another of the new breed of bingo games it’s not one you find everywhere, but if you find a site that offers 30 ball bingo it is great for super quick sessions where you want to give yourself as many winning chances as possible.

You can even play in between other longer form games – honestly, a 30 ball bingo game can be over in seconds.

Despite being the simplest form of bingo in theory there are over 1.7 million possible unique cards you can produce, so little chance of cheating in that regard.