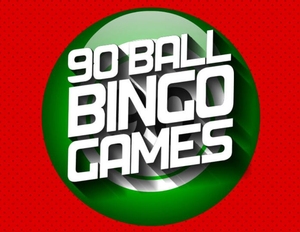 90 ball bingo is the game most people mean when they talk about bingo in the UK. It’s the most widely played version of the game and recognised as the ‘standard’ set up.

A 90 ball bingo card will have three horizontal rows or lines containing 9 squares each. Five of these squares will be filled with numbers, the other four will be blank. The numbers on your ticket will be random but, as you will see shortly, there is a structure to it.

If you look across the card from left to right you will notice that the numbers get higher as you go along. This is because each vertical row can only contain numbers from within certain parameters.

This basically means you have 15 numbers out of a possible 90 on your card, so these are the numbers you want to hear called out.

The other numbers on the card, which you can see in the top right of each ticket in the image below, is the unique number of each ticket. This has no impact on the game and is just a way to identify each ticket.

There are usually 3 winning stages to a 90 ball bingo game:

If you are concerned about someone cheating then consider that the number of possible unique 90-ball bingo tickets comes out at over 24 quadrillion (24 followed by 15 zeros).