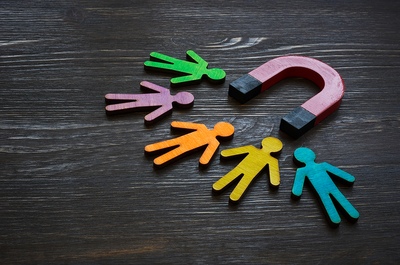 Bingo has seen something of a resurgence in recent years, with the online bingo revolution actually helping to bring people back to physical bingo halls in a roundabout way.

Well now bingo halls are trying to capitalise on that and nail down a brand new fan base, making them customers for life.

Desperate to shed the old fashioned reputation of little old ladies sitting in mostly empty, mostly drab bingo halls, bingo companies have been on a mission to reinvigorate themselves and their players.

How they have done that has been interesting, and whether its fancy new decorations, great offers and promotions, or bingo nights with a twist, bingo halls are certainly seeing more action these days, so the changes are working.

Here’s what’s been happening in the real world of bingo – how does your local club compare? If they aren’t pulling their weight then maybe you can give them some of these examples as suggestions and tell them to pull their socks up!

This sort of thing has always been happening, but bingo halls are mimicking their online counterparts much more these days in the sorts of offers available. What’s interesting though is how they are doing it as well as what they are offering.

A night at the bingo is now all about the overall experience and less specifically about the bingo. Now don’t all shout at us at once, the bingo is obviously still the most important thing, the game is the foundation of the afternoon or evening, but the drinks, the food, the entertainment and the social aspect are also what it is all about.

So obviously bingo halls are starting to build these things into their offers and promotions.

For example many companies offer new members free bingo up to a certain value, perhaps £50. That’s £50 worth of bingo tickets at no cost, which for anyone even slightly interested in the game is going to be pretty attractive, right? We wouldn’t say no.

Alternatively, Buzz Bingo ran a promotion where the first 4 visits to the club were on the house, so there are different ways of doing it but it’s basically the same thing – a free trial. 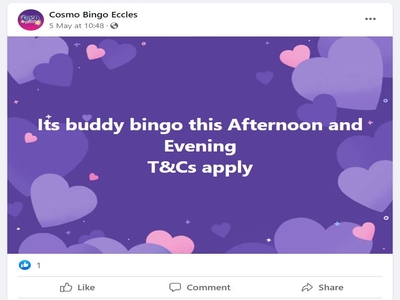 A particularly clever one is the “Bring a Buddy” promotion which Cosmo Bingo run amongst others, which gives the person who brings a buddy something for free, as well as their buddy. So they both do well out of it and the bingo hall gets a new face in the room. This is a savvy promotion because it does two jobs in one; it gets new members through the door, and it also sets up a social for the people taking part who will hopefully enjoy themselves and do it again.

To make sure players don’t just turn up once never to return, there are also offers such as “Play this week, get free tickets next week”, which would hopefully get someone to come back and establish a bit of a routine, making them a regular at the club.

Players at most venues can also buy a package that includes bingo tickets, food, and drink, all for one set price. That’s your evening taken care of for as little as a tenner!

Lastly, the prizes themselves can be more interesting than just money. Often the fun side games that are played between rounds of bingo can have silly prizes, but some places such as Club 3000 Bingo have given away Gucci watches in the past. 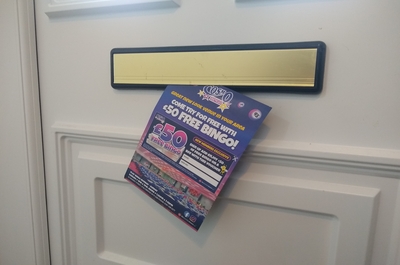 One of the main ways bingo companies advertise to people now is via social media and other online sources.

It makes sense; if you want to attract a modern audience you need to use modern methods of reaching them.

That doesn’t mean leaflets through the door and newspaper adverts have stopped, they are still on the go as you can see, but Facebook and Twitter and the like are being used to great advantage as well.

Cosmo are a good example here because they literally put this leaflet through our door a few weeks ago, and we also saw a Facebook ad for their new customer offer via targeted marketing.

This is where the company can pay for adverts to be put in front of people in certain areas and of certain ages/genders/employment status etc (there’s lots of options), to go after a specific type of new customer.

The perfect blend of old world and new world advertising.

Sometimes there are social media and email newsletter exclusive offers too, or ‘like and share’ posts which give access to prize draws, and competitions which reveal the winners via Facebook live, for example, so that really encourages player to engage with the companies online.

People are always looking for something special to do to mark important dates on the calendar. No we’re not talking about your 30th birthday Lesley (30 again?), or your retirement party Maureen, but about occasions like Christmas and Halloween etc.

It’s not unusual to find bingo halls decked out with decorations and the staff wearing costumes around these times, not to mention themed games and promotions/competitions. You might get a prize for wearing the scariest costume at Halloween for example. Things like that.

Another popular one is to organise celebrity guest appearances to get people through the doors. For example the X Factor’s Ray Quinn turned up at BJ’s Bingo in Leigh, and the Mecca Bingo Ball of 2022 had Bobby Norris of TOWIE fame doing the calling as well as guest appearances from Strictly Come Dancing’s Robyn Windsor and the TV psychic, Sally Morgan.

The type of celeb the bingo hall books will be directly related to the kind of crowd they want to attract, and celebs are a great way to bring younger generations flocking.

Along similar lines are fun ideas like Mecca Bingo’s Got Talent. This event held in Wakefield promised tickets to the actual Britain’s Got Talent live show as a prize (as well as cash), and an introduction to a talent agent. So it was bingo and a talent show all rolled into one – cracking idea.

Then of course there is the new breed of bingo nights which have been appealing to the young adults among us. The sort who would more usually be found in a nightclub are now scrambling to get tickets for the likes of Bonkers Bingo, a night hosted by Mecca at their venues, but run by Bonkers Bingo.

It’s unlike anything you will have seen before, and although they aren’t the only ones doing it, these nights are hugely popular, putting a unique and rebellious twist on the gentle game we are more used to.

All of these things reinvent the game to some degree, and are there to attract different types of people so that they will enjoy themselves on these ‘special’ occasions and then come back on the regular days.

It might not be as much fun as running a Bingo Talent Competition, but renovations were desperately needed at lots of bingo halls – no one wants to visit a dark smelly venue that looks like a time capsule from the 1970s.

This is why getting the leaky taps fixed, tearing up those smelly fag stained carpets, and sorting out the dirty outdated signage has been a real priority for bingo venues.

They have pretty much all done this now, so customers can enjoy a fresh looking (and smelling) atmosphere, clean tables with the latest bingo tech attached, positive lighting, and comfy new seats.

This is much more likely to appeal to a broad range of players, although it’s not just just about what the place looks like.

Most bingo halls now have food and drink menus that you might be just as likely to find at your local Wetherspoons. As an example Buzz offer dishes like spaghetti and meatballs, hunters chicken and chips, tikka masala and a whole host of burgers, sandwiches, and deserts. They have also run coffee and cake deals in the past for those afternoon sessions, so the venue is like a café/restaurant as well as a bingo hall.

Deals on Prosecco are hard to miss most weeks, and the bars are well stocked with popular drinks that would appeal to the modern player.

People don’t like being cut off from their online worlds anymore either, so you can expect to find good wifi at most venues which actually works in the bingo halls favour, because if someone is having a good time and takes a video or picture of it, that’s free advertising right there.

The last thing to think to mention is how bingo halls are embracing new technology.

We are all used to tapping and swiping nowadays, and very few people are scared of sticking their bank details into an online form.

To this end, bingo hall apps are now a thing, where players can pre-book their tables, scan their membership cards, and even order from the bar in some cases.

What’s more, people with an app might also be sent exclusive promotions and updates so they will be the first to know of anything exciting happening at their local club. This is exactly how the one at Club 3000 Bingo works and those for other companies will be similar.

Bingo Bees are another technology that has brought the real world of bingo into the 21st century. These portable tablets let players take the game with them to the bar (or the loo!) without fear of missing any numbers.

You just load them with money and buy the tickets for the games that you want. You can still mark off the numbers using a stylus type pen thingy, but if you miss one the Bee will catch it for you, and then highlight a winning line or full house so you can hit the ‘Claim’ button to alert the caller.

They’ve been around since about 2009 but have improved in that time, and offer benefits like being able to buy way more tickets than you could handle manually – even the fastest dabber can’t mark 72 cards at once – and having any winnings credited straight to the account so you can withdraw them as cash or spend them at the bar.

What Kind of Customers are Bingo Halls Attracting? 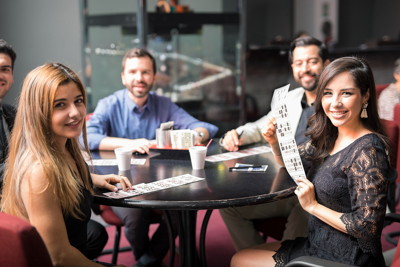 The thing about bingo is that it is a game for everyone, and the venue can be as adaptable as it needs to be.

A bog standard game of bingo is fun for people of any age, so lots of bingo clubs are trying to be inter-generational, as well as running specialist nights/games for specific ‘types’ of people.

What’s more, a bingo hall can be a place for some light banter and good old fashioned dabbing on a Thursday, and akin to a mosh pit on a Friday if Bonkers Bingo is in town, so it can offer something for all tastes.

It’s interesting that, according to Buzz Bingo, their busiest day of the year is Mother’s Day, which would indicate that bingo is still a game that appeals most to females, although the number of men playing is on the rise.

This clearly shows that more men, and more younger people are heading out for a night at the bingo – at Buzz venues anyway, but they are the UK’s biggest bingo hall operator so it’s safe to assume it’s a similar picture elsewhere.

So, not only are bingo halls managing to find all sorts of ways to bring in new customers these days, they are also changing the face of the bingo crowd one celebrity appearance at a time, and removing the wrinkled reputation of Bingo’s days gone by.