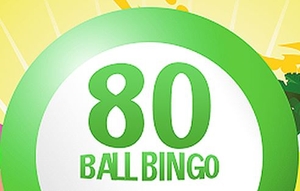 The 80-ball game is a little more niche compared with 90-ball and 75-ball variations but it has grown in popularity with the rise of bingo online.  Despite having a similar number of balls to both 75 and 90-ball games it has a very different card layout, a perfectly square 4×4 grid.  This gives the game more combinations that can win other than just a line, two lines and a full house.

Depending on the game you play and the payout structure you can win for horizontal, vertical and diagonal lines as well as four corner squares, inner square of 4 numbers, outer square of 12 numbers and of course the full house of 16 numbers.

It is an interesting game and lends itself to different themes, which is why its success has been increased as online bingo has grown.  Being a symmetrical 4×4 grid, however, must mean it is more simple and there are not that many different cards you can produce?

Surprisingly, perhaps, that is more unique cards than is possible with 90-ball bingo (24 quadrillion) but less than 75-ball bingo which can produce 552 septillion (552 followed by 24 more digits) possible cards.  Still, the number of 80-ball bingo ticket combinations is an immense number.

To put it into some context let’s say you wanted to print all of those cards and you could print one card per second.  You can print 31,536,600 cards per year, a hell of a lot, but even then it would take you just under 5.8 trillion years to print them.  That’s around 420 times longer than the universe has existed.

To see how we go to this incomprehensible number read on below. 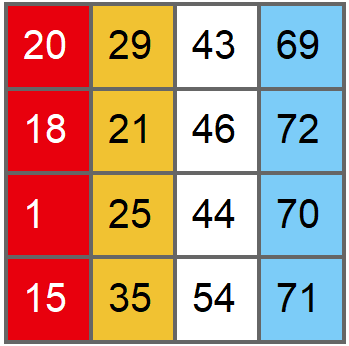 Each card has 16 numbers, split into 4 columns which each select from a quarter of the possible numbers (so e.g. if number 31 is present on a card, it will always be in the second column).

Each column of an 80-ball bingo card contains 4 numbers. These numbers are selected from 20 possibilities: for example, the first column can contain any 4 numbers from 1 to 20 inclusive.

On an 80-ball bingo card, the order in which the numbers appear is significant and can vary. For example, a card with the numbers 1, 13, 19, 14 in the first column is different from one with the same numbers in a different order – because methods of winning including completing rows, columns, or in some games other shapes (e.g. all four corners or the four inner squares), these two different orderings of numbers in a column will give different results.

(where n is the number of possibilities and r is the number of selections we are making, i.e. in our case n = 20 and r = 4), we are able to calculate that there are 116,280 permutations for each column.

Below is the Python code for calculating this – so if you’re planning or playing a slight variety of the game, you could tweak this and see how the total number of cards is affected if e.g. there are 12 possible numbers in each column instead of 10.