Online bingo games are simply a digital simulation of the physical land-based game of bingo. It uses virtual bingo cards and usually some kind of chat room to replicate the social aspect of playing the game in an actual hall.

Just like real world bingo, there are a variety of different games available for you to play – including 90 ball, 80 ball, and 75 ball, plus some online-only exclusives that you won’t find in a brick and mortar bingo halls.

This is your guide to those game varieties.

The 90-ball version of the game is the one best known to players in the United Kingdom, and it has found widespread popularity across the rest of the world as well. It utilises 90 numbered balls, and the bingo cards which are provided are marked out in a grid of 9×3 boxes, incorporating nine columns and three rows.

Each of these rows contains five numbers, so each each card contains a total of 15 different numbers. Each of the nine columns will contain either one or two numbers, with the first offering up numbers from the 1-9 range, the second 20-29, the third 30-39 and so on.

In order to complete a single line win, the player needs to mark off all five numbers on a single row, while a full house is won by marking off every single number on the card. 90-ball bingo games usually pay out to the first player to complete one line, then two lines, and finally the full house. This means there are three prizes in each game, and any player could win one, none, or all of them.

Here are the usual ways to win in a little more detail:

This, along with the 90-ball variation of the game, are the oldest known versions of bingo. 75-ball is more prominent across the United States, and as the name suggests, it uses 75 numbered balls. 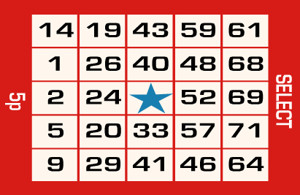 The game is played on cards that feature a 5×5 grid. The centre of this grid is always left out as a free space, and therefore, each card contains a total of 24 different numbers. The top of the card will feature the word ‘BINGO’, with each of the letters appearing above one of the columns. The ‘B’ column contains numbers in the range of 1-15, the I column contains numbers up to 30 and so on.

A winning line in 75-ball bingo can be created horizontally, vertically, or even diagonally. This type of bingo will also often feature patterns on its cards which can get pretty whacky, and it can also be played as a variation known as ‘Speed Bingo’.

There are lots of different winning patterns for 75-ball bingo, just a few of which include:

Being a relatively new variation of bingo, 80-ball merges the larger number of bingo balls with the card style of the 75-ball game. Games are played on a 4×4 grid and feature a total of 16 numbers per card. 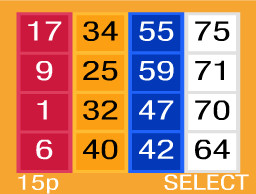 As with the 75-ball version, wins can be formed horizontally, vertically, or diagonally, however, this game doesn’t feature the central free space. Numbers are organised in a similar way to other versions, with 1-20 showing in the first column, increasing by 20 through to the last column which incorporates numbers 61-80.

Cards are usually colour coded as well, and as with 75-ball bingo, game cards can utilise pattern matching to win as well as lines and full house style games.

This game is actually considered to be its own entity as it is an online only product, and demonstrates the first instance of online bingo leading the way over physical bingo.

As well as the three most popular varieties noted above, there are a few other bingo variations that are worth knowing about:

50-ball bingo provides players with a single card featuring an individual grid of 10 squares, made up of two rows and five columns. Each of the squares is numbered, and wins are created when a single line is marked off or when the full house is marked off.

Fifty ball bingo isn’t particularly common, but can be found at Gala Bingo. 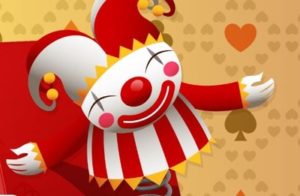 With Joker Jackpot, you’ll be given a full deck of 52 playing cards plus two jokers. Buying a single ticket will present you with nine cards from the deck. The rest of the cards are then dealt (called as if they were bingo balls) and you need to match the cards appearing with those in your own hand.

Deal or No Deal

This is based on the television show of the same name, and uses the same type of tickets as the 90-ball offering. Four prizes exist within this version of the game; a single line win, two line win, full house, and the ‘Deal or No Deal Feature’ prize. The latter of these can be seen before each game draw commences, and on each side of the feature area will be 22 different amounts that are held within 22 boxes.

The blue lower amounts will show on the left, with the red higher amounts on the right. A box is automatically chosen at random from the red ones, and this becomes the player’s box. The remaining 21 boxes then open to reveal numbers from 1-90, and each time a ball is drawn featuring the same number, it opens to reveal an amount from the prize board.