It might be better known as a slot, but Rainbow Riches works brilliantly as a bingo game too. The Leprechaun doing the bingo calling is an especially funny touch!

The really great thing about this game though is how many extra ways to win that are included. There are extra features and jackpots as well as special 1TG games, so it’s much more interesting than a standard game of bingo.

For some players this might all be a bit too much to keep track of, and that’s ok, online bingo variations exist to keep all kinds of players happy; but for people who love the extra’s this one is probably for you.

It tends to attract more players than a lot of other games so it’s also a good option if you fancy a bit of a chat room session as well, plus, the extra benefit is the base game prizes are better.

How to Play Rainbow Riches Bingo 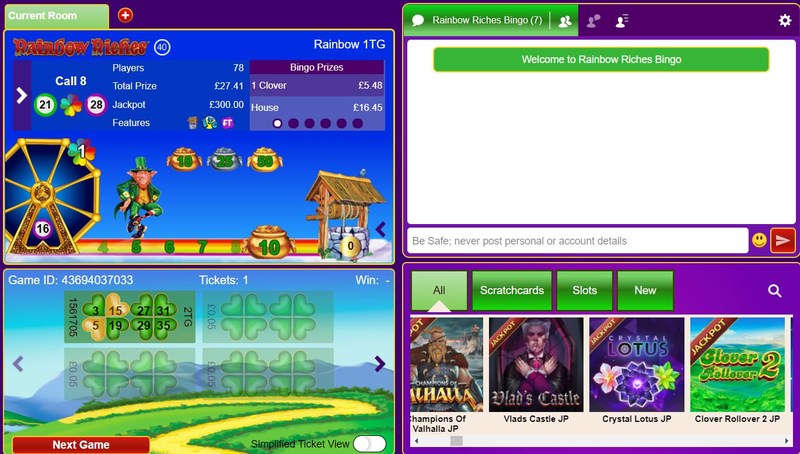 This one is only a 40 ball game, so they start and end pretty quickly and you can fly through a fair few games in an hour.

However many tickets you buy, the base game offers two different ways to win a prize – the tickets look a little different here with the Irish theming and all, so we will be talking about clovers instead of lines:

The value of the prizes themselves depend on how many players there are and how many tickets have been bought, but basically the more there are the higher it gets.

You should also keep an eagle eye out for 1TG games, because these keep a small pot of money aside to share between players who only had one number to go when someone won the full house – so you can win even when you don’t win.

The base game is great fun, but there are also two extra features to enjoy with Rainbow Riches bingo.

Yep, plural. There are three of them.

These jackpots are won by the community rather than by a single player, so keep an eye on that little leprechaun fella dancing along the numbered line, because when he lands on one of the pots it will be shared.

The leprechaun will advance every time a special clover is called instead of a bingo ball. Here is how many you need to pop the jackpot and how much it is worth:

So playing at the right time can see you bag a tasty share of the pot of gold at the end of the rainbow.

It doesn’t take too long to get through them either, you can reach the silver pot much faster than you might think. 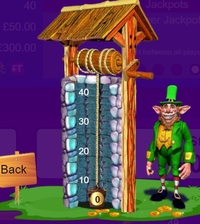 One cool thing about this feature is that you get to pick your own lucky number. Don’t worry if you forget though, you will be given one at random if you don’t pick one yourself from the drop down menu.

If that lucky number comes up during the game then you will win a gold coin, and these are stored until you collect 40 of them.

Once that happens, you will get a £5 bonus – which is very nice indeed thank you. Obviously it might take you a while to get there, but if you were going to play anyway it’s a lovely extra and it might just come in exactly when you need it.