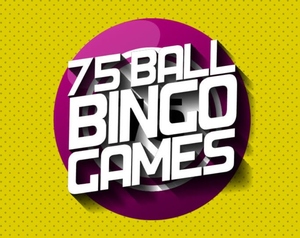 This is one of the most widely played versions of the game in the world. In fact, many people refer to 75 ball bingo as ‘traditional bingo’, especially in America. 75 ball to the yanks is what 90 ball is to us Brits, although there are still plenty of opportunities to play it over here.

Your ticket is made up of a 5×5 grid, so it’s bigger than 80 ball despite using fewer numbers, and every square will have a number in it except for the very middle one, which is ‘free’ and can count towards a winning pattern.

Above the grid the word BINGO is often written, with one letter for each vertical row of the grid. The specific numbers that can appear in the column under each letter are:

This setup means that you will have 24 of the possible 75 numbers on your card, so just under a third of them.

Some 75 ball games don’t have the word BINGO written at the top of them, like those in our example image, but each column can contain the same numbers listed above regardless.

The other numbers you can see in this image are each tickets’ identification number – which does not affect the game – and the ticket price.

In order to win you need to complete certain patterns on your card. There are often single line, double line, and full house (sometimes called a blackout) wins available as normal, but 75 ball is a bit more wacky than other games because you can also win by forming letters, shapes, or patterns.

There are literally hundreds of options and every game will be something different which keeps things fresh.

A few popular ones are:

75 ball bingo feels more light hearted than some of the others because of these fun patterns that are created as winning lines. The options are only as limited as your imagination really.

If you are interested in knowing how many possible unique 75-ball bingo cards can be produced head over to our stats page.  The number is so unbelievably big it will surprise you.