Who loves bingo? Us too.

Who loves bowling? Us too!

Well, if you answered yes to both of those questions then you are going to lose your tiny little mind with Bingo Bowl.

It’s a mash up of both games and comes with not one but two jackpots, one of which is progressive.

The theming is strong and the game is simple, and the added opportunities to win more from the jackpots yanks up the excitement too.

How to Play Bingo Bowl

This 50 ball game can be played for as little as 5p a ticket, and they can be bought simply by clicking on the ones that you want as normal. The only way to win though is by marking off every number on your card and completing a full house.

We say ‘number’, but really what you are doing is knocking down pins; the numbers on your card are represented by bowling pins racked up in the traditional triangle formation.

The calls roll out a a bowling ball machine too, so it’s all very silly and fun. 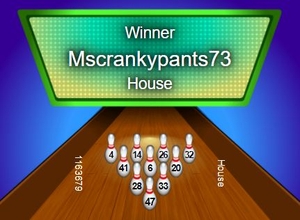 As usual, the regular prize for a normal game win depends on how many tickets have been bought, but in terms of gameplay anyone who has ventured from 90 ball bingo in the past will know what to expect.

As it’s only a 50 ball game they don’t usually take more than a minute or two before someone wins, a fancy animation flashes, and then then it is on to the next game.

Starting with the smallest of the two, the Kingpin Jackpot is actually split up and it tracks across multiple games, updating as it goes.

It operates as its own ticket but it is much harder for players to mark of the numbers because to do so, they need to get a full house on a number that is also on the jackpot ticket. That number will then be coloured gold and be marked off.

Any player who wins a regular game by getting a full house on a number that is also on the kingpin jackpot ticket will win the ‘any number’ amount. It’s £5 in the image above.

However, the person who manages this on the final pin (the last one not coloured gold) will win the Kingpin Jackpot – £50 in the image, and pin number 27.

The Lucky Strike Jackpot is a progressive so it grows the longer people play without triggering it, and it seeds at £2,500 so it is a biggie right from the start.

To win the jackpot a player needs to complete a full house in 15 calls or fewer – which is really hard to do! It’s worth it though, because they will get 50% of the jackpot total, with the other 50% split between all other players.

Both jackpots are community based but they run separately from each other.