This is an extremely popular bingo room that ties in with the slot of the same name. It’s full of cuddly toy type creatures and these characters even take part in a feature of the game later on.

It’s a 90 ball version of bingo so you stand to win three times in the base game, from a line, 2 lines, and then a full house, but there is a lot more to this game than that.

Plus, since it is always so busy it is a great option for players who like to chat in the chat room and take part in the mini games runs by the chat host.

Players who love good old fashioned 90 ball bingo but like to see as many extra ways to win as possible should definitely have a look at this one.

How to Play Fluffy Favourites 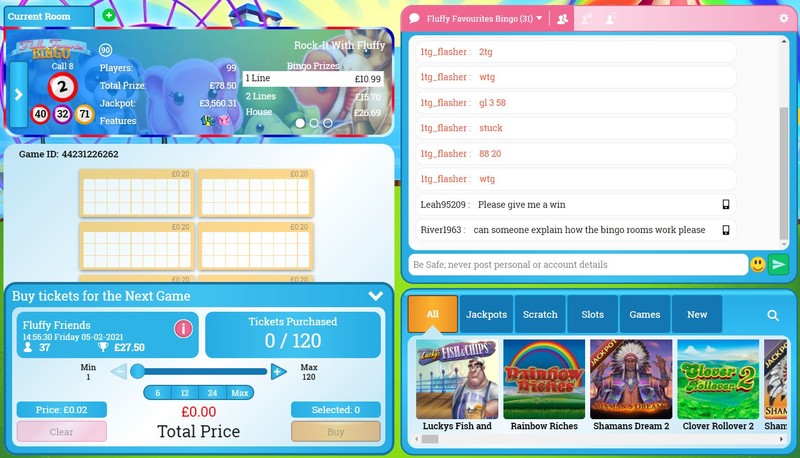 If you got rid of all the extra features then Fluffy Favourites Bingo would play out just like any regular 90 ball bingo game.

Before each game the features that are active will be made clear, and you can buy as many tickets as you choose either by using the slider bar or by selecting them manually.

After the game starts it will work through each round as normal with the prize for each game depending on how many tickets have been bought. It’s a popular room though so these are usually decent amounts.

You can see all of the specific details for each game in the information bar at the top, alongside where the numbers are being called. This will also show the symbols for the features included in the current game.

The Fluffy Favourites slot game will also be open as a side game by default when you first load the game up, but you don’t have to play it unless you want to. 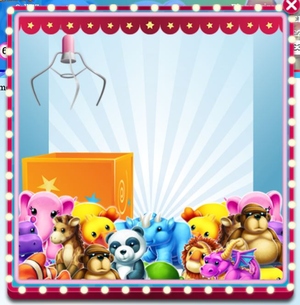 At the end of the game, the player who got the full house has the chance to play for an even better prize, so long as the feature is active for that game. It’s not always but there will be a symbol to let you know if it is.

This is the Fluffy Favourites Feature and initially it takes the shape of a single line 3 reel slot machine. If the right symbols come up, the player will be taken to one of 4 extra games:

These are all very light games where the player has a simple decision to make; for example in Toy Grabber they have to choose a drop zone for the claw to collect a cuddly toy from. 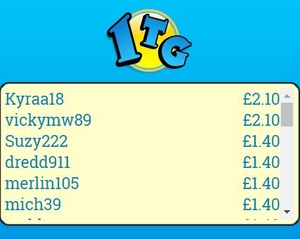 The 1TG (1 to go) feature may also be active in this game.

This creates a mini pot which is split between all tickets that only have one more number to go when the full house game is won.

This is split per ticket not per player, so if you have 3 tickets with 1TG and someone else wins the full house, you will get 3 shares of the 1TG pot.

How much each qualifying ticket is worth depends on how much is in the pot and how many other people have 1TG tickets when the game is won.

The others features are nice, but the community jackpot is the one you really want to win, and you can do so by getting a full house inside of 35 numbers called.

The jackpot is much less likely to occur than the features, but when it does you will want to have bought tickets. This is because it is a community jackpot, so winnings are split 50/50 between the player who won the game and the rest of the players in the room. So everyone can celebrate!

It seeds (starts off) at £1,000 after it is won each time, but as it is a progressive jackpot it can grow to many times that amount before it is won again. Basically, 2% of every ticket bought goes to the jackpot so it grows as quickly as people buy tickets.

It could be worth thousands next time you look.