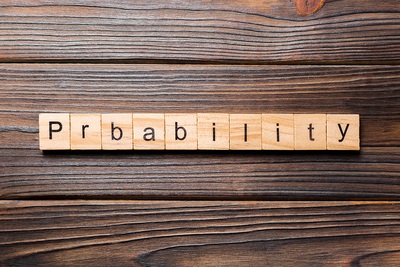 Us bingo fans aren’t exactly well known for getting stuck into the statistics and data surrounding our beautiful game, but actually, if you do a tiny bit of reading up on it there’s some interesting stuff to find out.

When it comes to winning a game of bingo it is all about good luck, because there is nothing that any of us can do to increase our chances of winning on each ticket (we can buy more tickets but each ticket has the same chance of winning).

That’s probably partly why we love it, anyone could win at any moment – but just how likely is it for a win to come our way at any given time?

Well, we’ve done the number crunching so you don’t have to and the results are in!

What are the Chances of Winning in 90 Ball Bingo?

Before we get into the more confusing stuff, let’s have a quick gander at the overall chances of winning a game of bingo.

We can look at a few different things when we talk about the odds of winning, but at the end of the day it comes down to how many tickets have been sold, and how many of those tickets are owned by you.

You might think it would be about the number of players, but it’s not, because all players could have a different number of tickets. The odds don’t care how many people are playing, only how many tickets there are.

You could have a game with 10 players which you might think gives each player a 1 in 10 chance of claiming the prize, but if one player had 91 tickets and the other nine only had 1 ticket each, that first player has a lot more chances to win than all of the others. You would expect them to win 91 times out of 100.

(Use the calculator on your phone – we did!)

Each single ticket has the same chance of winning, and in this example that would be:

Chances of Getting a Line or Full House in Bingo 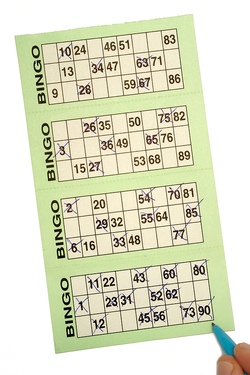 It’s also possible to figure out the chances of a single ticket winning a line, 2 lines, or a full house within a certain number of balls called. The number of players makes no difference here, the odds are set and are the same for every ticket, as though each ticket was the only one in the game.

We are using a 90 ball game for this example, but the odds would change if you were playing a different type of bingo game, like 40 ball for example.

Let’s start with something easy.

The quickest possible way anyone can win a line in bingo is in 5 balls, and that would mean every single number on their line would come up one after another at the start of the game. The chances of this happening are almost non-existent though, just 0.000007%.

Similarly, the quickest possible full house win is in 15 balls, because that’s how many numbers are on each ticket. If you managed this you would also win the line and 2 line prizes by default. A dream come true right? But unfortunately a dream is about as close as you will come to it because it’s virtually impossible.

Here are your chances of winning a line per ticket, based on number of balls called. We have listed the percentages in 5 ball increments.

For two lines you would be looking at these odds – we had to start at 20 balls called because the chances were so small below this that our calculator wouldn’t do it – really!

Ready for one more table?

This one shows the percentage chance of getting a full house by the number of balls called. We have started at 35 balls this time because once again, the calculator couldn’t deal with anything less.

So you see, the more tickets there are in a game the more likely it is that someone will win more quickly, which is why online games can finish in no time. Every extra ticket bought is one more chance for someone to get the ticket with all the right numbers on it.

So the more tickets there are in a game, the less chance each ticket has of winning (even though all tickets have the exact same probability of winning), and the faster that game is likely to be won.

For example, if there were infinite tickets in a game then that game would be guaranteed to end after 15 balls, because somewhere out there would be the ticket matching the first 15 numbers called. The only reason this almost never happens is because there are so many different number calling combinations compared to the number of tickets sold for most games.

Get your head around this: there are 45,795,673,964,460,80 different ways that all 90 balls can be called. We don’t even know how to say that number, and any game with that amount of tickets sold would have a stonking prize pot!

Obviously this game will never exist, but it shows why most games take between 50 and 65 calls to find a winner, and games hardly ever take more than 75 calls before they end.

On the other end of the scale, a tiny 2% of games finish in under 48 calls according to a study of over 170,000 different games of 90 ball bingo, so you can see why these progressive jackpots attached to bingo games online hardly ever get won – you usually need to win in under 40 balls to claim them.

Now we know that 90 ball isn’t the only bingo game out there anymore, the bingo industry has never been as diverse as it is today.

The article would be far too long if we covered every single game variation but since 75 ball is arguably the second most popular form of bingo online we have some stats for that game too.

We will have to stick to being the first to get a full line (vertical, horizontal, or diagonal) though, because all of the different patterns would all have different odds and there are hundreds of them – 75 ball bingo is the craziest of them all in many respects.

Anyway, back to business.

The chances of winning a standard game of 75 ball bingo also depends on how many tickets are sold, so we have gone with a 10 ticket game, a 50 ticket game, and a 100 ticket game, to show the effect that increased numbers of tickets have.

Here you can see the chances of a 75 ball game ending within a certain number of balls called, depending on how many tickets have been sold.

Just like with 90 ball bingo, the more tickets there are, the greater the chances the game will finish sooner.

We can also look at each individual ticket’s chances of winning within a certain number of balls called.

Another way to think of the numbers above, is that if you played a game of 75 ball bingo with only one ticket you would win within 45 balls called around 50% of the time.