It’s been on the telly box since the 60s, hundreds of characters have appeared on the show and found a place in viewers’ hearts, and now they are also available in bingo form.

What’s really great about this game is the fact that clips from big storylines are showed as you wait for each new game to begin, and you can even select certain characters to call the game and announce the numbers. This really places the game on the cobbles and there are not many bingo games with a theme this strong.

For fans of the great British soap then this game is a must, but what does it have in store for players who don’t tune in to find out what’s been going on in Weatherfield each week?

Well there are LOADS of jackpots for a start, some fixed and some progressive, so lets get stuck in and have a good natter about Coronation Street bingo.

How to Play Coronation Street Bingo 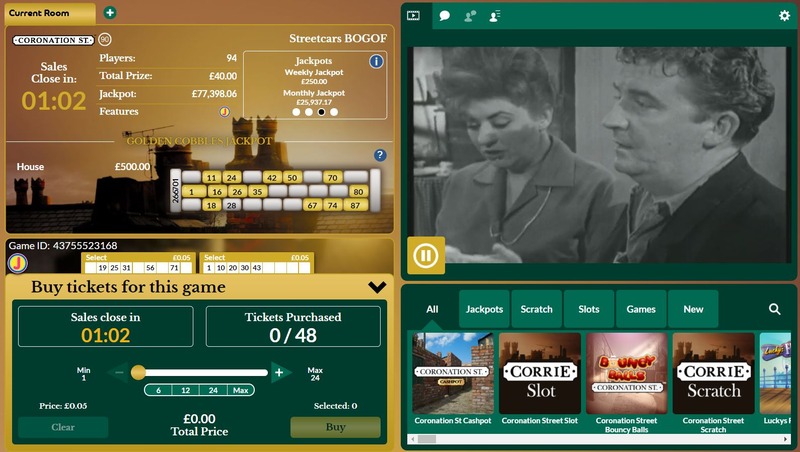 This one works as a normal 90 ball bingo game first of all, so you can expect to find everything just how it usually is to begin with.

Obviously the Corro branding is all over the place so it looks a little bit different, but apart from that it’s a regular game of good old bingo.

It’s always popular so the prizes are usually well worth winning, but the lure of the Golden Cobbles Jackpot adds a lot more meat to this particular hot pot.

You will notice a bingo ticket designed in the style of a cobbled street on the interface, and many of the cobbles are golden, while others just have numbers on.

If you win a prize and your winning number also happens to complete a line, full house etc on the Golden Cobbles ticket, then you win the corresponding jackpot for that too. This can be between £5 for any number and £500 for a full house.

This ticket is different for each game but it is the same for all players, so everyone is playing the same Golden Cobbles ticket in each game even though their purchased tickets are obviously all different. 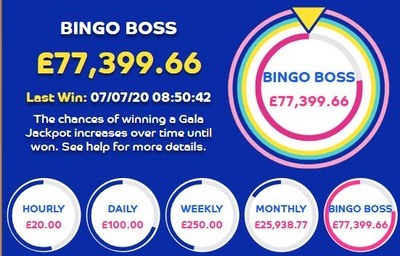 There is another jackpot attached to this game, and it’s a biggie.

This comes as a guaranteed hourly, daily, and weekly fixed amount as follows:

And there are also two progressives:

These jackpots can all be randomly won across a number of different games, but Corrie Bingo is one of them.