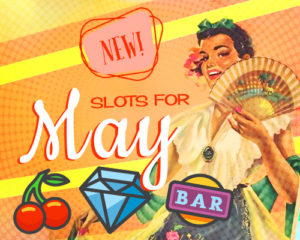 May looks set to be a very exciting month for slot gamers ahead of what promises to be a bumper summer of releases to come.

We have a lot of new games released, some that have been spoken about for a while, and plenty of big-name developers involved, showing us the latest that is coming from their production line.

With plenty out there, we have taken a look at picking out the four games that excite us the most, giving you the low down so you know what to expect when they are released and available to play.

Playtech Double Release in May

It is fair to say that Playtech are going big in May, with not one high-quality release, but two.

As one of the bigger developers, we have seen this from them before, and we are expecting a lot of talk around Playtech and their titles over the coming weeks.

The Walking Dead 2 Released for the TV Show Fans 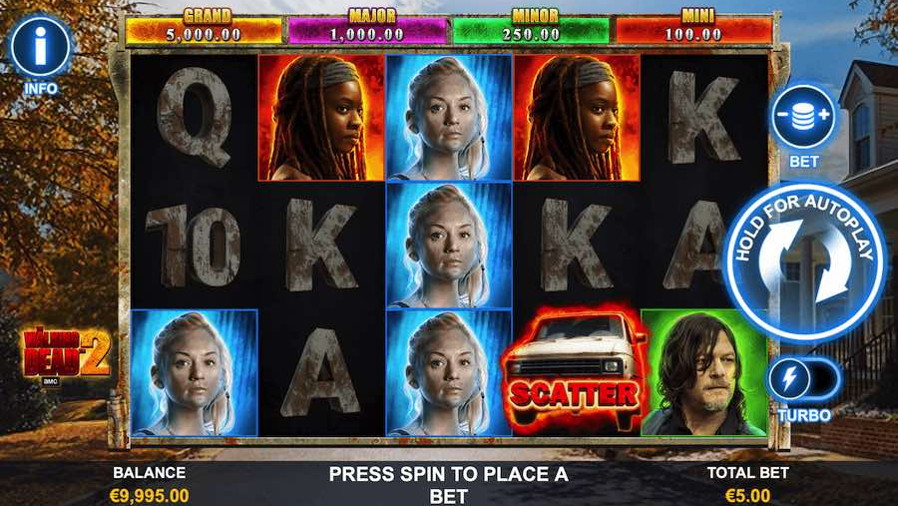 Many people will have heard of The Walking Dead, with some of those watching every episode of the show that has not only gripped the US but many parts of the world. We have previously seen a licensed slot released, and this is now the second slot in the series, which again features moments and characters from the TV show to bring it to life.

If you played the first slot game based on The Walking Dead then the good news is that this game is bigger, better and with a much higher jackpot for you to aim at, so everything looks to be very positive.

In terms of the game itself, 5×3 reels are in place, and they give a total of 25 pay lines for you to work with. The game has an RTP of 95.84%, while the jackpot is 5,000x your unit stake, so certainly enough for people to get excited about. The biggest selling point though is the number of features that are on this game, with some of them focused on the TV show itself.

Walking Wild free games are specifically designed because of the show, while you can also play on multiplier free games, super-stacked free games, sticky wilds and a coin bonus game. All of these are different features, where you can gain free spins, multipliers to increase your returns and a lot more, all of which you can access through landing scatters on the reels.

The slot itself plays really well, for anyone, but if you are a fan of The Walking Dead then you are going to love this even more. An official license is in place, so you can see photos of characters in the game, as well as many other references, which certainly helps the game stand out from the crowd.

For those who love this show, this is a great game to enjoy, whether you have played games based on TV shows before, or not. 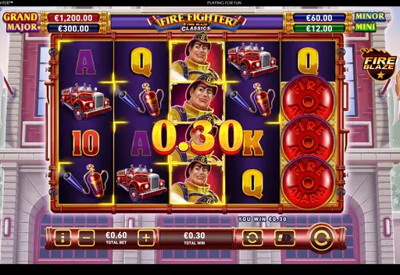 The second game that Playtech have brought to us is Fire Fighter, a game that joins others that are in the Fire Blaze series. This a series of games that has some great fixed jackpot for you to aim at, and for those who have played a game from this series before, the Fire Fighter game takes on exactly the same path, with the same fixed jackpots.

There are four game jackpots in total, the grand, major, minor and mini, which you will aim to win and they go in that order in terms of how big the prizes are. The biggest gives you a total win of 2,000x your unit stake, so certainly something to try and win.

Make sure you look out for the fight fighter symbols, which you will see on the middle three reels. When these appear, they are used as wilds in the game, substituting in to fill in the gaps for other symbols, in order to create winning lines.

Fire balls are the second symbol to look out for, get eight of these anywhere on the five reels and you will head into the special feature, which is a hold and respin feature. This is how you win the main jackpot, because when these are together, they grow and cover more of the board. Cover the full board, and you take home the biggest jackpot on the game.

Even if you haven’t played one of the games from this series before, you should have no problem jumping right in here, as these games are very simple and easy to understand. 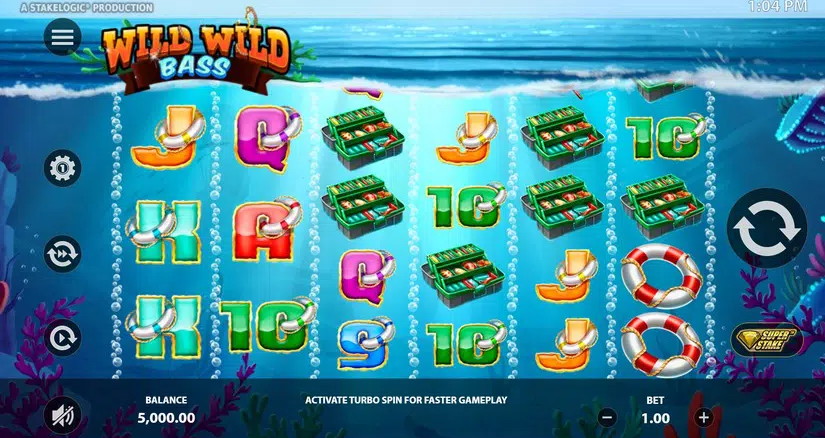 We have seen some great fishing themed slots released over the years, which have been very popular with players. Now, we get to see another added to this collection, with Wild Wild Bass released by Stakelogic in May.

The game has a variable RTP which can be changed depending on the game style wanted, the maximum this goes up to is 96.01%, while the biggest jackpot on offer for this game is 1,289x your unit stake.

If you are looking for a different style of game, then this may be the title for you to look at this month. The reels on the game expand, starting with a lot of ways to win, and increasing to give even more. The set up begins with 3-3-4-4-4-4 symbols shown across the six reels on the board, which give you 2304 win lines. This can expand up to 3-3-5-5-5-5 which means you will then have 5625 different win lines to aim for.

The main feature on the game is the big catch feature. Get two wilds on the first two reels and this will begin, and this is where the lines all increase by one symbol, raising the number of win lines. Look out for the last reel here when you are in this mode, as the insane catch mode is available then, which gives you 2-4 spins in this mode, where the first two reels are replaced by multipliers to increase your winnings. If you want to hit the big wins on this slot, it is this mode where you will do that, with wins multiplied by anywhere between 2x and 5x, thanks to the multipliers that are in place.

The fishing theme is a popular one with players, and many games have used the theme before successfully to create a strong user base. Wild Wild Bass is the next game to try this, and with the quirky reels on offer, and something a little different, the game looks set to have a strong start when it is released in May. 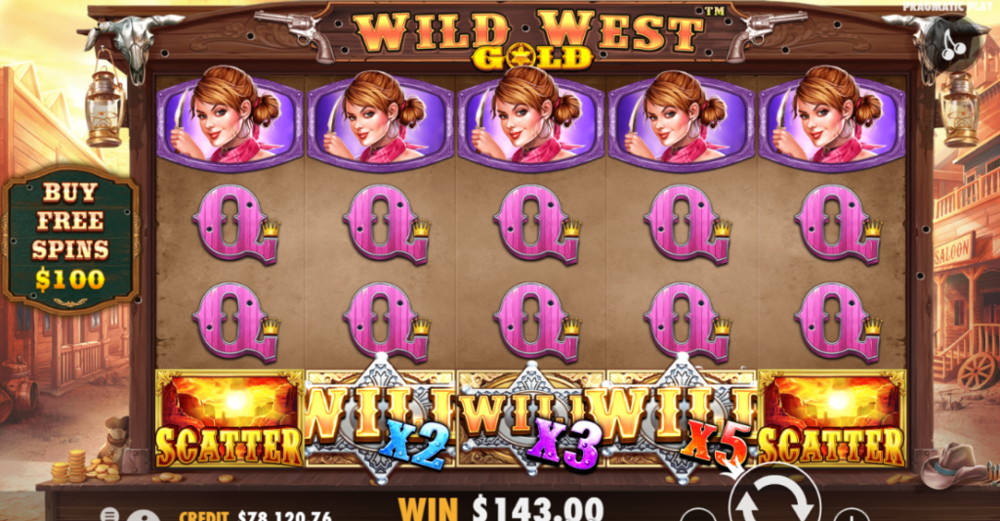 The final game we are looking at this month is one from Pragmatic Play that has received a facelift and been re-released, and the game is Wild West Gold. Some will remember this from the original release of the game, but the big change here is the game now offers Megaways gaming.

As with most Megaways games, the expanding reels here provide a total of 117,649 win lines when they are stretched as big as they can be, while the big jackpot win is 5,000x your unit stake. The RTP on this game is varied, the highest it can go up to is 96.44%, which is very strong.

Scatters are the way to win on this game, and you need 3-6 of these to get into the free spins game. You will receive seven free spins when you do this, plus a win based on the number of scatters you have, which can be anywhere between 4x to 500x your unit stake.

Wilds offer the other way to win big, as these come with multipliers attached to them. These can be 2x, 3x or 5x, and the great benefit of these is that if you get two together then they will multiply by each other, to create even bigger wins when you have winning lines.

Some will have heard of Wild West Gold from before, and given the facelift the game has received, it is likely to receive a boost in popularity over the coming weeks. Megaways continues to excite players, even though many games are now available, and will help draw a crowd of players wanting to get involved.