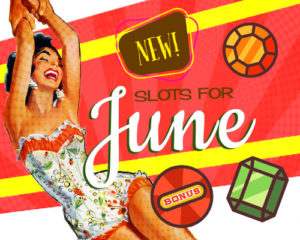 June is a big month for football fans, with the delayed Euro 2020 competition kicking off. We saw last May and June, ahead of when the tournament should have taken place, a range of football-themed slots released by many different developers.

Despite that, we are seeing the same again and football-themed slots dominate the releases for this coming month, with many to choose from. Some of these games will have been delayed from last year until fans reached football fever while others will have been created over the past few months with this summer in mind.

Here is a look at some of those football releases and others as we look at what new slots you can play this month. 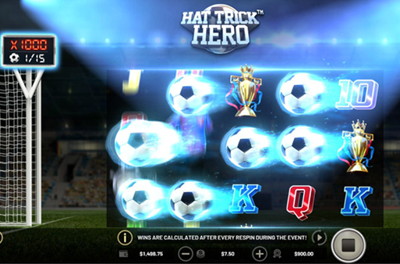 The first football-themed slot to take a look at is Hat Trick Hero from BetSoft. They have created quite a complex game here, ideal for experienced slot gamers who want to try something that is both new and advanced.

There are 25 pay lines on this 5×3 slot board, with a jackpot of 1260x your unit stake and a very good RTP of 96.23%. Look out for a range of football-themed symbols that you can play along with, as well as football-themed features such as a hat trick hero event, a power shot wild and a score meter to try and build.

The hat trick hero bonus is the main special feature of the game, and one that has really been tailored towards football fans, essentially here you are trying to score a goal. To get onto this feature, you need to land on three power shot wilds on the reels at the same time. While in the feature you get free re-spins, which are used to try and move the power shot symbol to the goal line to get a shot on goal. When you take your shot, the score meter goes up by one, and if you get this meter up to 15, you will win the feature jackpot of 1000x your stake.

With a very strong football theme, this is certainly a game for fans to enjoy. However, having such a complex feel to it, thanks to the hat trick hero feature inside the game, it is probably one that will appeal more to experienced slot players. If you are intending to watch Euro 2020 this summer, or you just want to enjoy a game that has a football theme, it is certainly an option and a very good one. 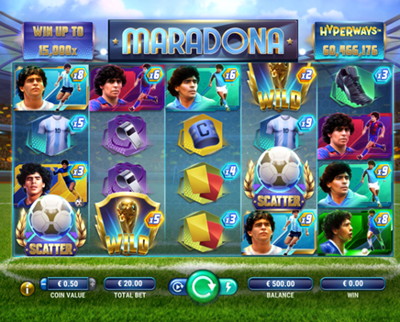 Although an Argentinian and not someone who would have played in the European Championships, this slot game from GameArt is certainly one that will attract a lot of attention from players over the summer.

Diego Maradona will go down as being one of the greatest footballers to ever live and play the game. He passed away towards the end of 2020, and Maradona Hyperways goes some way to honouring just what a fantastic player he was, and the impact he had on the game of football.

Onto the slot itself, this is certainly one for football and Maradona fans to enjoy. The game has the hyperways style of play attached to it, this means that instead of adding more reels to the game to create more lines, it simply adds multipliers to add more lines. A total of 60,466,176 hyperways can be activated if you have all nine multiplier symbols on the reels. This is of course a huge amount of lines to win from, and a great way to pick up a lot of smaller wins, rather than aiming for a big one.

However, if you want to aim for a big jackpot then this game can also offer that. The biggest win on this slot is a huge 50,000x your stake, and with stakes going up to 40 units, that could mean a jackpot pay out of two million cash, certainly a life-changing figure for any person. The RTP on offer here is a strong 96.30% too, so the game combines regular wins, with a lot of lines that you can win off and a huge jackpot figure to aim for, plenty to like.

When playing the game, you will notice that every symbol on the board is related to either football or Maradona, with some of them being pictures of the famous player. There are no real symbols to look out for here, but what you want to do is lookout for the symbols that have multipliers attached to them. These are the ones that can lead to the biggest wins on the board.

The scatter symbol, which is a football with the word scatter written across it, will give you a free spins game with eight free spins. You need five scatters to get this, but one cool element of this game is that you will get a free kick if you have four scatters, to try and score and get a fifth. When this happens, you will get to re-spin one reel, in a bid to add a fifth scatter to the board.

This is an action-packed tribute to Diego Maradona, and if you are a fan of him or a fan of football in general and you want to immerse yourself in a football slot, this is one you can try and one that looks set to be popular. 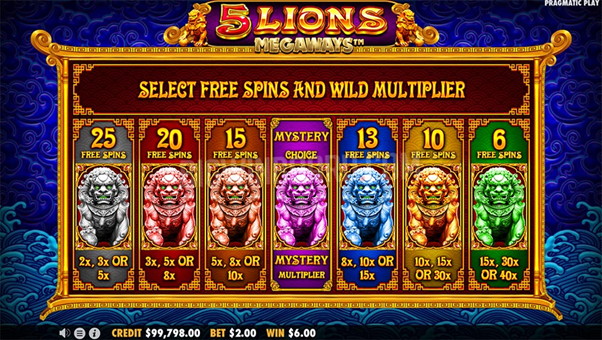 Away from football, the final game to look at is one that looks likely to appeal to a lot of players. This is because of two reasons, the first is that the game has the Megaways software on it, which appeals to a lot of players and in this instance, offers 200,704 different ways to win when the lines are expanded as much as possible.

The second is because 5 Lions is a series of games, all made by Pragmatic Play, so there will be people out there who have played on other games from the 5 Lions series in the past. This isn’t a sequel to those games, but a different look at them, with the Megaways functionality offering that.

In terms of staking on games like this, you work on a basis of 20 game lines, but if you expand the reels then you have far more than that number of ways to win. The RTP for the game is another impressive feature, standing at 96.50% so you know you are going to get a very good deal from this game.

The tumble system is in play on this game, so when you get a winning line, make sure you focus on the board as you may get more winners from that. The winning symbols from your line are taken away, those above fall, and new symbols go to the top of the reels. If the fall causes more wins, you will get paid out on those too.

The final aspect of this game to mention is the feature on the game, which is a free spins feature with a twist. The twist is that you can choose the number of free spins and multiplier you receive, so you can either go all in or give yourself more chances to win a smaller amount.

This adds a very good feature to the game, one that has a twist to it too, as well as the big Megaways function, so there is a lot to like here and a lot to get involved with for players who want to give this game a go.

Many will be excited about this release and it is easy to see why, expect this game to be a very popular one this month.