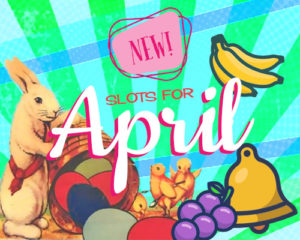 April is here and it appears as though we are set for a busy month of slots play and news. Several releases are scheduled to take place throughout the month, and they cover a wide variety of game themes and developers, who are all aiming to bring out the best game this month.

The theme running through our picks this month is games that offer a slightly different element of gaming, and an alternative from the same, regular style of games that many play on a regular basis.

If you are looking for that and you want to try something new this month to kickstart your slot gaming then here we take a look at the best of those new releases for April 2021. All three featured games offer a slightly different way of playing, but at the same time are simple enough to be user friendly for newer players. 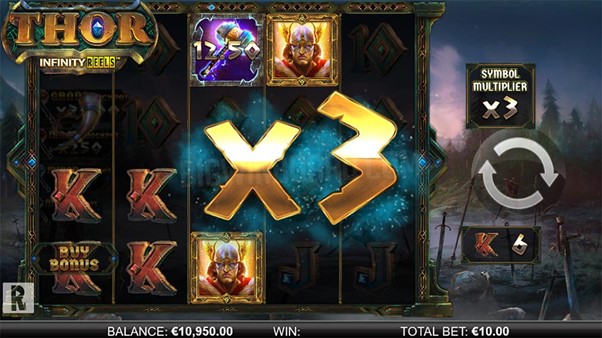 The infinity reels style of slot game is still developing and catching the eye, so some may not have heard of it yet. However, as more good titles like this one are released, it is only going to attract more attention from players. As the name suggests, the number of reels on this game is infinite, you begin with a 3×4 gaming board, and as you play and have success, the reels keep expanding. There are no limits to this, the game really could take you anywhere as a player.

The game has an RTP of 96.20% which is very good, especially when you consider the volatility of the slot, which is always going to be high for a game with this setup. There is a fixed jackpot on the game of 2000x your unit stake but this can be added to by using the multipliers that the game has on offer. When all put together, the biggest payout for players is 6055x your unit stake, so certainly something worth aiming for.

The game of Thor is based on Norwegian mythology, and Thor himself is the biggest paying symbol in the game. Others include card symbols as well as other symbols from the period such as hammers, axes, shields and helmets.

When playing, you will start with three reels and the way to get additional reels is to match five or more symbols together. This adds another and continues to happen. When you have activated 12 or more reels an infinity bonus is available which is 888x your stake, so certainly lookout for that one.

The big appeal of this title is that it offers a completely fresh look at slot gaming. It is exciting, you don’t know how your game will take shape as you play, and it is something that many will never have played before. If you are an experienced slot player but looking for something new and different to bring back the spark of slot gaming then this is the type of game you want, and this release has been brought out with you in mind. 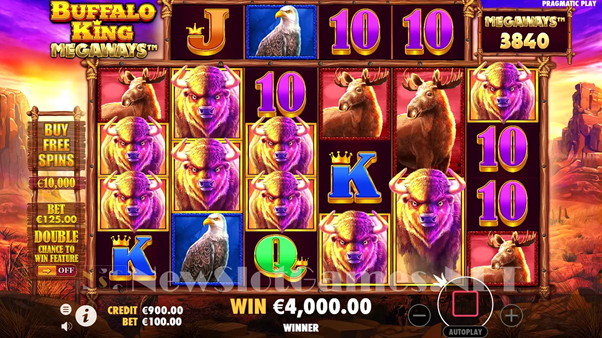 The Megaways slot games are incredibly popular and many developers have cashed in on this over the years and created titles with this engine. This month we have a new game coming from Pragmatic Play with Buffalo King Megaways hitting our screens.

This game follows the general Megaways style of play, although with an extra symbol on each reel than standard here, there are over 200,000 ways to win on the game when the reels are fully expanded.

The RTP is strong at 96.52% which is great to see, although the jackpot on the game is only 5000x your unit stake, which is a little smaller than what we are used to seeing and will disappoint some. The six reels can go up to a maximum of eight symbols, one more than what many of the other Megaways titles have on them.

The theme of the game is North American wildlife, with the buffalo being the main symbol in the game. Look out for eagles, cougars, elks and wolves to round off the animals on display, these act as symbols and can also be found in the background of the game.

If you are wanting to make up some winning lines then the wild can help you do this. You will notice that the symbol is a mountain symbol, easily recognisable and the habitat of choice for many of the animals on this game.

Overall, this game is similar to many other Megaways titles but does have the added benefit of even more ways to win thanks to the fact that the additional symbol on the reels brings about many more chances of winning. 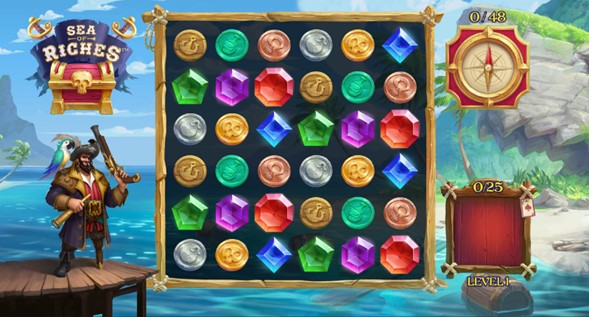 Continuing the theme of games that offer something a little different to the standard type of slot gaming, we have Sea of Riches released in April. This is a game that features the cluster pays mechanism rather than the standard pay lines that many players will be used it. If you are looking for a different style of play, cluster pays is an option and if that is what you want then this game is one of many you can try out.

The game has a very fun and relaxed look to it, you are on a desert island with a pirate in the background, which is pleasing to the eye. As for the game itself, you will notice that the symbols on the game are coins and gems, which play into the sea theme and the pirate, these are essentially treasure.

The 6×6 reel setup gives you a large gaming board to play on in a bid to land some clusters and get your payout. You need five symbols of the same kind together to win here, they need to be together in a cluster rather than just being across a line on the reels. The more you get, the bigger the payout.

A slight disappointment would be the jackpot on offer here, which is just 2416x your unit stake, we would certainly like that to be higher. However, with medium volatility and an RTP of 96%, this is a game that should provide you with regular smaller wins.

When it comes to features on this game, we have an action-packed board, something that will suit more experienced gamers for sure, but everyone can enjoy. First of all, wilds play a big part in this game and you will easily see this because they are the traditional wild symbol. Add them to your cluster as they take the place of one symbol to give you a win.

Down the right-hand side of the game, you will see the treasure map collectors section. This goes up when you collect symbols with maps in bottles. To fil the collection, you will need 25 of these symbols throughout your time gaming, with four different rewards on offer if you are successful.

Down the left-hand side, you will see another collectors section, this is the captain’s compass, and this is charged by you landing winning lines. Get more wins, charge the compass, and then lookout for the big rewards to come your way. Again, four are available, which all either transform or remove symbols from the board in a bid to help you win.

With a very nice looking theme and a game that is full of big features and different things to look out for, this slot is sure to attract attention from players. Yet again, it is another option for players who are looking to spark their interest in slot gaming by trying something new and something a little different to standard slot gaming.