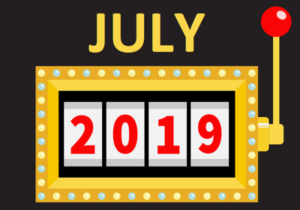 While you are busy thinking your upcoming holiday through, your favourite slot providers keep themselves occupied with fresh launches. This summer is swarming with novel issues, and some deserve more heed than others.

Working tirelessly on developing the best solutions possible, these game manufacturers have come up with some remarkable titles with intricate mechanics.

We have selected an array of the most notable numbers for the month of July 2019 from a range of the hottest suppliers right now. Lest you are in pursuit of infinitely immersive and endlessly entertaining quality video slots, odds are you will find your holy grail in our blog.

What lies ahead is a well-rounded arrangement of diversified titles that each belongs to a different and unique theme. This compilation encircles the realistic and fantastical, and adjoins them to original designs and expert game creators.

We also made sure to step out of the comfort zone and include a bunch of varied playing constructions. Therefore, what is laid before you is a custom-made list that we deem will suit everyone’s taste. The titles are listed in no particular order. 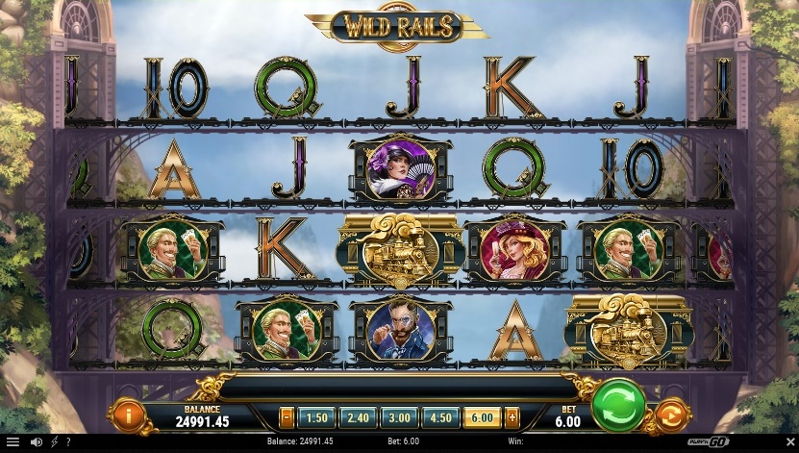 We believe you are likely searching for diversity in your games? In a sea of upcoming releases, it is sometimes hard to separate wheat from chaff. Attempting not to bug you with repetitive and unoriginal titles, we singled out an unparalleled assortment based on player-oriented criteria.

We are kicking off chronologically and revisiting the past with this one. Wild Rails is one of the most highly anticipated releases from the Swedish game maker this year. Ridding of the standard reed grid, this Victorian gemstone is playable across a 5×4 framework.

It comes with an RTP of 96.53%, which makes it a decent choice for both high rollers and low stake players. Its high volatility arrives with a bet range that covers everything from £0.30 to £90.

However, subjectively the most outstanding feature must be the looks of it. Play’n GO went an extra mile with Wild Rails. The title of the game might sound a bit cliché, but it is in fact symbolic.

It represents the setting of the match, which is the Victorian era railway. A couple takes care of the mysterious station, and this eerie ambiance is exactly what lures you in.

Moreover, extra features are certainly not to be neglected. There is no progressive on this railroad, but free spins come in abundance. Collecting three to five scatters renders open this round that can reward you with up to 10 extra turns.

Tackling the theme of fantasy and cartoon, Betsoft’s Spinfinity Man shows up right on time. Naturally, we need to start off with graphics. Irresistibly reminiscent of those 90’s cartoons like the Rugrats and Carton Network heroes, Spinfinity Man is a uniquely created character for a modern-day player. Every animation lover will definitely appreciate the visual appeal that this slot possesses.

Its bonus features come in the shape of super powers, laser beams and the lad’s number one fan, all arranged across a Tetris-like 7×7 reel grid. The way the game pays out your wins is the cluster pay system, which, if you ask us, is the perfect match to the game’s topic. The villain, Mr. X, will attempt to destroy the town you are in charge of taking care of, and you need to face him.

You ought to take the role of the ultimate protector, and we believe you can do it.

Mercy of the Gods – NetEnt 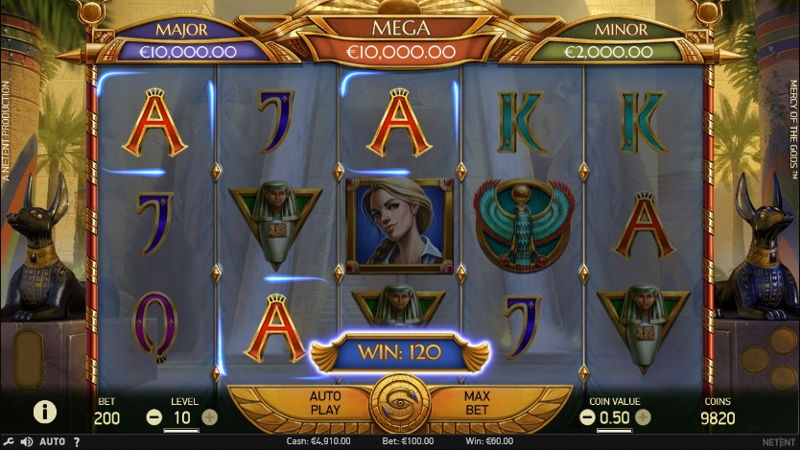 Have you considered Egypt for this summer’s holiday destination?

NetEnt reverts to the popular online casino theme and puts a twist on the standard story line. While the game is still an adventure chronicle, it steps up in front of the competition by offering something more.

Mercy of the Gods takes place on a 5-reel, 3-row playing structure with 20 fixed paylines. Its high volatility will appeal to the patient among you. It also boasts an RTP value of 96.64%, which is a common evaluation among slots at the moment. For what it’s worth, it is even slightly higher than other NetEnt’s classic’s, Divine Fortune (96.59%).

Mercy of the Gods has a young and ambitious female explorer as its protagonist.  She has made it her mission to unravel the mysteries of the ancient edifices of Egypt, and she needs your assistance.

The symbols you are to fathom along the way encompass scarabs, crooks and flails, the Eye of Horus and pharaohs, among others. The chosen path will lead you through a mass of predicaments and challenges. Left to your own devices, you will need to rely on free spins to get you out of the ordeal.

Luckily for you, there is plenty to accumulate. 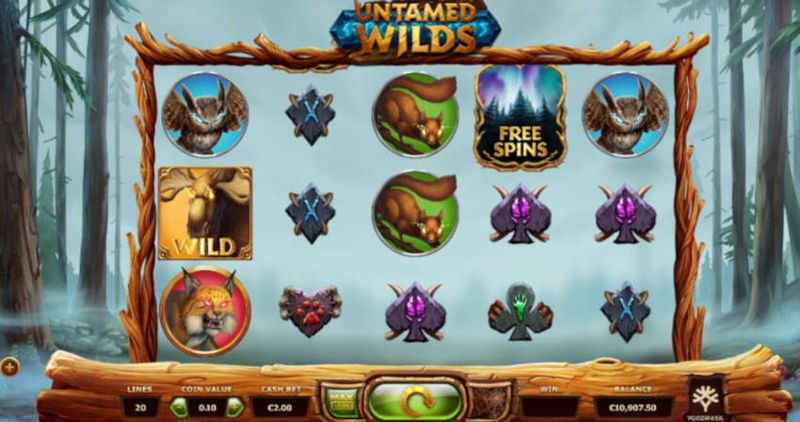 Yggdrasil Gaming has for a long time been known for impeccable visuals. Untamed Wilds comes nothing short of perfect with its stunning animations and addictive gameplay.

Playable across all platforms, this video slot can be enjoyed at home or on the go. It takes up a 5×3 playing board accompanied by 20 paylines and an RTP of 96.10%. While mathematically might not be Yggdrasil’s finest estimation, this online slot is still worthy of your attention. Here’s why.

First of all, the introductory video sets up the scene with magical scenery and gobsmacking landscape. A wild bear’s paw scratches the surface of the display, so you had better remain vigilant. An unexplored forest is the “crime scene”, adding up to the seemingly sinister surrounding.

Regarding gratis turns, you have the chance of scooping up to 60 of those! High denomination symbols will get you there. Assemble as many identical ones as you can, and you will have a reason to celebrate. High-paying shapes include the likes of the lynx, the cunning fox, the spooky owl and the angry wild boar.

Succeed in picking up at least three strange woods symbols and another bonus game will be triggered. 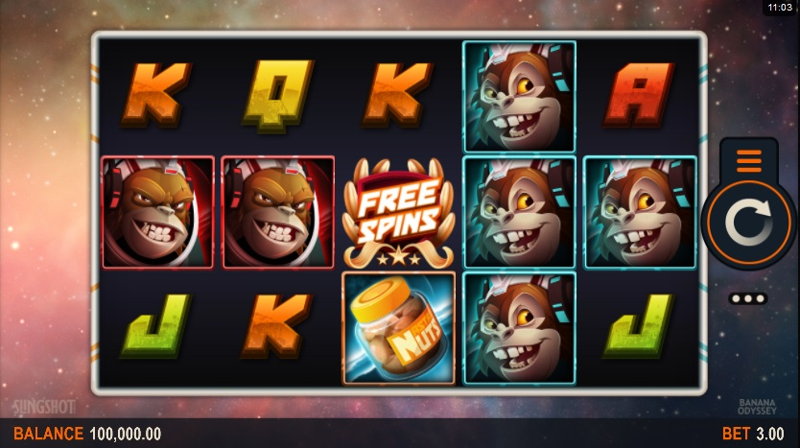 If you have been in the iGaming circles for some time, you will have noticed that provider ft. casino collaborations do not occur that often.

However, once in a blue moon, a game developer will come with a title that will only suit a particular online gambling venue, and that is when the magic happens. July of 2019 sees Microgaming team up with Twin Casino on revolutionary monkey business. We know how that sounds, but stay tuned.

Banana Odyssey is quite similar to Kubrick’s 2001: A Space Odyssey; it’s just that its heroes are a pair of gorillas. The Malta-regulated online gaming brand has welcomed the first ever in-house launch this month. It is a 5×3 online slot with 10 paylines that pay both ways, allowing you more opportunities to fill up your bankroll.

The generous betting scope encompasses everything from £0.10 to £400, and the variety of bonus attributes complements the range beautifully. Reels 2, 3 and 4 will salute free spins scatters which will then render open the magnanimous free spins game.

On top of it all, all banana wilds expand to boost your chances of winning bigger.

Also out This Month

It would truly be unfair if we limited the selection to only a quintet of slots.

The above mentioned and numerous other manufacturers put a lot of effort in fresh games especially in the summer, not wanting you to think they ever get lazy. Because they don’t.

We will take a moment to acknowledge several honourable mentions. Some will be novelty, whilst others are a continuation to a long-lived saga. Stick with us through the following: 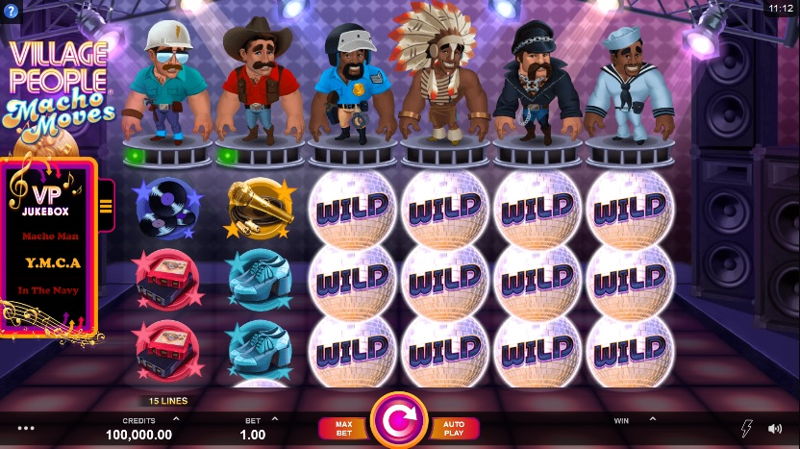 Isle of Man-based pioneer of mobile gaming already has well over a thousand games in its possession, but it never ceases to impress. In September 2018, Microgaming inked a deal with ITV Studios Global with the aim of developing a brand new game that remained a secret until about a month ago.

Then the game embodiment of the 1980’s band Village People came to existence. Featuring hits like Macho Man and YMCA, this online slot comes with a decent medium variance, a 5×3 grid and an RTP of 96%. The award-winning slot provider has greater RTPs to offer, that’s for sure, but this one will absolutely do. It is branded and it is unlike any other musical release.

If you enjoy the likes of eighties pop, you should unquestionably tune in on this one and get rolling! 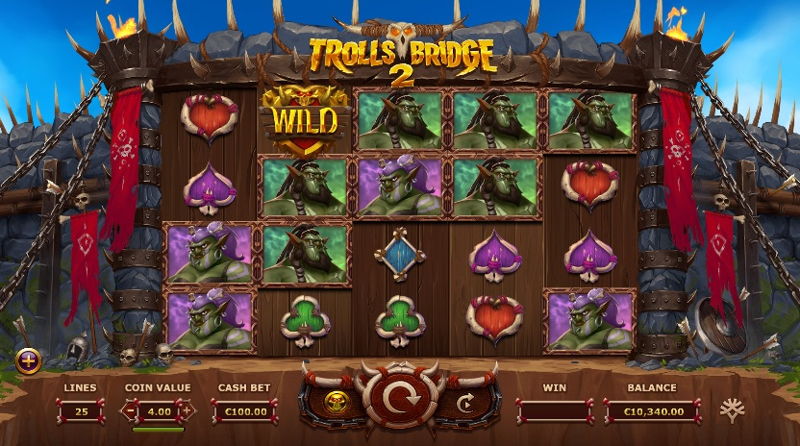 Summer is all about growth. In addition to new blasts, Yggdrasil aims at pleasing existing clients as well.Trolls Bridge is by now an all-time classic, and the headquarters decided it deserved a follow-up. Retaining the initial title and the medium volatility are about the only things the sequel has in common with the first one.The RTP extended by a percentage and reached the number of 96.70% from 96.30%. The layout is now greater for another row and occupies a 5×4 space. With the bet range of £0.10 to £140, you can win up to 350,000 in coins. Needless to say, the slot is payable on mobile, tablet and desktop equally smoothly. The 25 paylines are distributed in a thematic and somewhat frightening environment.

Wilde and the Tome of Madness – Play’n GO

Make way for another expansion. Our beloved hero Rich Wilde returns to revisit his chosen profession.

He has had his rest for almost three years, and we deem that was more than enough. He has caught his breath and is now ready to get back on track. For those of you reading these lines with a confused frown on your faces, Rich Wilde is an original protagonist created by H. P. Lovecraft and developed by Play’n GO for the first time in 2013.

Since then, three sequels – this one included – have seen the light of day. The Tome of Madness is played on a 5-reel, 5-row column grid utilising the cluster pay scheme. Packed with multipliers, wilds and scatter symbols, this slot is all you need to get a wealthy experience.

Some of the special features include the Octopus Pendant (allowing you up 100x your stake), the Dagger (50x your stake) and the Cthulhu Skull (30x your bet).